It’s one of the most baffling unsolved crimes in FBI history.

In 1971, a man later known as D.B. Cooper hijacked a Seattle-bound flight and parachuted out of the airplane with a ransom totaling $200,000. He was never seen again.

Now, as 2 Investigator Brad Edwards reports, a retired Indiana construction worker might have just cracked the case the FBI never could.

“I never in my wildest dreams would’ve thought I would ever use Morse Code, or any kind of code-breaking, again,” the 70-year-old veteran said.

The California-based police trainer, author and TV producer has been investigating the D.B. Cooper mystery with a cold case team for years. He asked Sherwood to review lines of potential encryption in letters allegedly sent by D.B. Cooper. 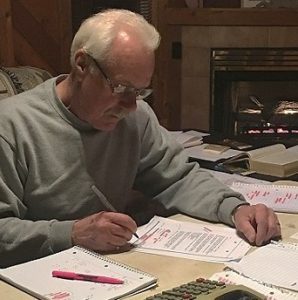 Colbert suspected the daredevil was a California man by the name of Robert W. Rackstraw Sr. Sherwood and Rackstraw served in the same Vietnam Army unit together.

Using the military code-breaking skills, Sherwood believes he definitively connected D.B. Cooper to veteran Rackstraw, uncovering his name and other details in the letters.

“I think certainly there’s a strong circumstantial case now, especially the link between the decoded messages and Rackstraw,” he said.

Observers have said Rackstraw had the training and the motive to pull off the heist. He left the Army for “conduct unbecoming an officer,” months before the hijacking. Investigator Edwards reached Rackstraw by phone, but he declined to answer questions, saying he’d only speak face-to-face.

“How confident are you that D.B. Cooper is Robert Rackstraw?” Edwards asks Sherwood.

“If I were him, I’d be extremely nervous,” Sherwood said.

An FBI spokeswoman said the agency is no longer actively investigating the case and declined to confirm if Rackstraw was ever a suspect.

Colbert’s team, however, uncovered 1979 articles that confirmed the Bureau’s interest.