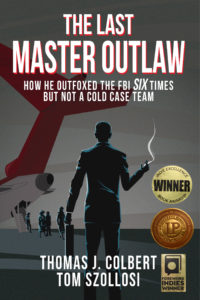 “D.B. Cooper” is Alive and Well

In 1971, a skyjacker with a briefcase bomb demanded a $200,000 ransom and a parachute. Then he vanished out the jet’s back door and became an instant legend.

A determined citizen sleuth assembled a 40-member cold case team, spearheaded by former FBI agents, to solve it. And after a seven-year quest, the investigators believe they’ve succeeded—with a fugitive “D.B. Cooper” at trail’s end.

The team’s relentless hunt and final confrontation with the mystery man serve as the bookends in The Last Master Outlaw. The suspect’s astonishing life story as a daredevil fills the remaining chapters, the bulk of which comes from the heartwarming, gut-wrenching accounts of six of his women—two former wives, his only sister, a befriended flight attendant, a “getaway gal” he met up with during two more FBI escapes, both again involving planes, and a Hollywood producer who became his cocaine-trade partner.

Buckle your seat belts as this Jekyll-and-Hyde ladies’ man travels through five countries, utilizing more than twenty identities, wigs, and fake mustaches while engaging in a half-dozen careers and raising three families. Then be a witness as the cornered chameleon is forced to face the truth in front of the cameras of a dogged cold case team, armed and ready for any eventuality.

Court-released FBI records and four retired senior commanders (with damning documents) collectively conclude Robert W. Rackstraw Sr. is the missing 1971 hijacker. And Hollywood agrees; in fact, after the mike-drop at our 2018 announcement at FBI Headquarters, the race was on for the daredevil’s rights.

Tinseltown tipsters revealed the San Diego veteran was secretly flown up by private jet for a meet-and-greet involving talent agents, leading producers, studios and streamers. My wife and I, however, were fully prepared for this end-run on our long investigation.

The hush-hush negotiations failed because: 1) Rackstraw was the dark polar-opposite of the folk hero many had imagined; 2) all the new case details and evidence have been copyrighted in our bullet-proof book – including his getaway with the help of crime partners, the parachute recovery, the decrypted Army-coded letters and his CIA history; and finally, 3) when he traded an FBI prison cell for years of black ops work, authorities warned him he would be re-incarcerated if he ever went public.

The Industry should also know that Rackstraw’s memory of the jump is now, ironically, cloudy. During a private 2013 approach and sit-down in his hometown, the cordial suspect twice admitted (on cold case team’s surveillance tape): “The problem is I don’t remember a lot of it.”

We believe that’s why, with our book release in 2016, “Bob” was one of the first orders on Amazon. Here’s his review: “Full of unsubstantiated accusations and innuendos by writers trying to sensationalize with consistently negative comments about their target with nothing but unearned credits given to themselves. Wish they would go after Hillary and Obama in the same ruthless manner.”

Dawna and I spent years of our time to organize the hunt and meticulously document this man’s incredible true story – our 21st discovery to reach the big and small screens. But there isn’t a race to make history here; we’re looking for the right production partner that respects the team’s efforts and, needless to say, won’t take us for a ride. TJC

Oprah Winfrey – Couple THE VOW was based on — Where...